Some baggage belt broke at LAX and, even though I was all carry on, it delayed my flight several hours causing just enough of a delay that I missed my connecting flight in Germany to Austria.  There were 6 of us journalists that missed our connection and it would be another 7 hours before we could get on a flight to Salzburg. If we waited we’d miss the screening of 20th Century FOX’s Knight & Day which would cause a domino effect of other issues. It’s only a 4 hour drive from Germany to Austria so we ordered a car and decided to drive! It was such a beautiful trip – when do you get a chance to see the countryside this way! The autobahn is so efficient and even saw the areas where hops were growing, apparently it’s where all the beer made for Oktoberfest. The beauty was interrupted when we got pulled over by a plain clothed police officer asking to see our papers as we headed into Austria – I suddenly felt like the Von Trapp’s in the Sound of Music. We finally made it to Salzburg which is just a picture perfect city. 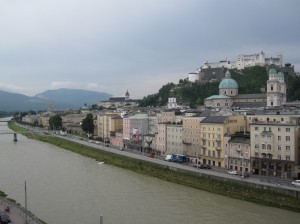